I am still watching the post-election mood closely and once more 'Occupy Democrats' or as I call them 'the motherload of false logic and fake divisive approaches' provided me with some excellent material: 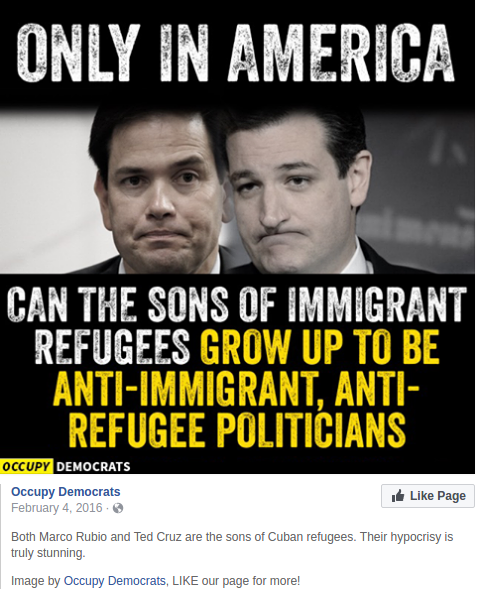 To test one of my theories of 'weaponized trigger words' on a famed social media site - the kind for the old people - Facebook - I created a post : 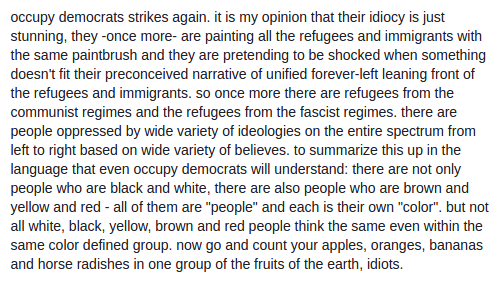 loaded with what I consider to be this type of "loaded" trigger words and then observed my social media friends start to argue.

It is not shocking that both 'groups' thought I am talking to them.

It took no time to go completely off-topic and dive into loaded entreched 'debate' with flying memes and pictures. I found it frustrating that neither side zoomed on the merit of the problem much but instead rather quickly got into accusatory partisanship rooted in the past.

It become immediately obvious that both groups would have gone into middle-of-the-road more civil debate had they used the official naming scheme 'documented' and 'undocumented' immigrants. Unfortunately that naming scheme recently devolved into 'trigger' subgroup of words too so it would probably make no difference.

The perceived 'right wing' side implied that the refugees could be a security risk and made some attempt to make distinctions between legal, illegal immigrants and refugees but eventually put refugees in the same bag with undocumented immigrants. The 'left wing' side ended up mushing all the groups into one bag of 'the immigrants' and decided not to make any difference among Cubans and other 'Hispanics.' Upon being directly asked to explain their statement why they said politicians of Cuban origin are 'a disgrace to their Hispanic heritage' the same party went into rambling on Hipanic poverty and "rich slimebags." Both sides of the debate just automatically assumed that all the 'immigrants' are going 'for a better life here' in the USA.

I was tempted to poke them further with the following trigger word loaded post:

"you guys have some bizzarro things going on here. the last time I was *that* poor was when the commies ruled Czechoslovakia. the last time I have seen poverty like what I am seeing here in the USA was in mid 80's in Romania. I know it is one strange parallel to compare Hispanic and other poverty combined with this illusion of wealth inflicted on the rest of the USA to communist-inflicted poverty but -well - it is not really much different. and BTW we now have the roads and the infrastructure in the USA of *that* quality too. here in America it seems to be like no matter which party is elected the outcome is weird, there we had one singular ruling weird party with similar outcome.

as I see it - it looks like you first had the slaves and it was not that effective of a workforce to start with and it was becoming a PR disaster so you freed them and kept them around as a scarecrow for a while and then you forgot about them all together and while the workforce was being replaced with actively recruited poor immigrants that were told they are the better people than those freed slaves . the moment new immigrants were becoming comfortable here and started asking for decent wages you put screws on them with more immigrants and later just to make sure those will not get too comfortable too you stopped giving them even a path to the legal status this time around. and to make everybody around more miserable you keep changing the definition of the refugee status and severely limiting who can be awarded the refugee status . that all above confuses everyone around even further so much that they stop making distinction between legal and illegal immigration and no wonder it is doing just that. it would seem that the distinction has been made this foggy on purpose and both sides contributed and helped. then mysteriously both sides seems to be programmed to react to some words around this issue like Pavlov's dogs to the bell.

is there perhaps something in the water supplies here that is causing this behavior? it looks like this extreme gridlock is the one uniting moment here. I am observing it closely for the 19th year now and it is not getting any better. before that you had that common cause in defeating the enemy in the bipolar world, and that vacuum later filled with the domestic replacement enemy is perhaps part of this problem. I sometimes wonder if all those foreign wars we are having for the last 20 or so years - that to me don't seem to make the USA any safer and the targets any more democratic places either- could be partially some vain attempt to get us out of this gridlock.

the owners and handlers are still laughing while you argue over things they told you to argue over. so I bring a gift - a gift of an enemy in the form of rambling ungrateful immigrant that by both the standards of the participating groups either should shut up and be just happy to be allowed here at all and perhaps should be just happy that he is not black or brown or should feel some fake sympathy for the plight of the poor and immediately recognize his privilege and become another useful idiot in this game. "

But while I was writing that both sides already concluded their spite with statements that just re-stated their political affiliation with appropriate nasty memes and the debate died.

As one can observe I was going to test more words and collect more weird logic but I was bit tired from watching and decided that I have done enough damage in one day and saved the post for some other time.

Now I keep ever growing list of American trigger words for both major party supporters:

names of the colors - white, black, red, yellow, brown - used in the same sentence with the word 'people'

Why do I find this so very interesting and frustrating? The words like these generate negative connotations and establish ever growing subset of taboos that one doesn't bring up in the discussion beside close circle of friends now:

This limits topics to discuss when one's bubble is suddenly infested with people from the uncharted territory. Try it and you may see at least one group breaking fast into hysterics and yelling or leaving on pretense of another engagement. After the subtraction of the topics mentioned above the discussion becomes rather benign and boring. So far I have been able to determine that only following are acceptable since both 'party' groups love to show off or complain about them:

I find it rather amazing that so many people are being so easily distracted, divided and conquered with this simplistic tactic. Long live the independent voter!