The death of the Democratic party 

The death of the Democratic party


The boomers (most of them) cannot and would not let go. It is not enough that they gave us the Clintons, Bushes and now Trump. They are keeping us in this pickle for years to come.

They are essentially happy with things as they are. Most of them are collecting their Social Security checks and are on Medicare and Medicaid. Hell, I would be happy if I had that too. Most of us would. And since they are are such a big portion of the population, they are also big portion of the Democratic party.

As a matter of fact, they are not going anywhere until they die. They are the most conservative element of the Democrats right now. Any change is the last thing that they want.

I first became aware of this when I saw so many of my older friends lining up behind Hillary Clinton. She was a perfect candidate for their worries with her 'I will give you 8 more years of the same.'

Over the last week, I became aware of the fact that there are whole social groups who call themselves e.g. 'Democratic warriors against Trump and Sanders' 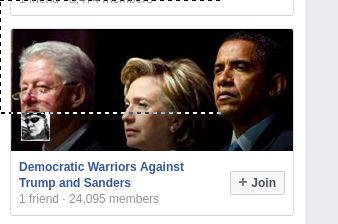 Just yesterday (2/24/2017) I saw our representative Brian Higgins, while giving his spiel to some (mostly retirement home) folks he said basically the same - by making an equation between Trump's rethoric and Bernie Sanders (right after re-affirming his never-flailing support for Clinton/establishemnt part of the party). Upon being questioned for taking a stance on some issues (deportation and crack-down executive orders of Trump administration) he made the toothless statement of "Wait and see".

It did not take long for the DNC to elect Tom Perez as chairperson today. I would not want to be a lavatory there a the DNC today. I think that the nausiated progressive wing of the party will use it a lot. This is the end of the Democrats. They should just join the Republicans directly, rather than going towards the people they decided to go further to the right.

This is good news. How? I am telling you that this will make it into some movement that will be the basis of some new major party in the USA eventually. It will be long a 8 years under Trump/Pence, but we will probably get back some 'radical' movements that used to be there to push the liberal class into doing things. I predict peace and social movements swelling as more and more of the discretionary spending on military and less and less on infrastructure will further pauperize the US homeland (which already looks like some third world country).